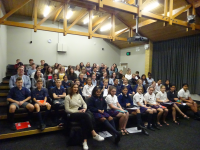 Chris Harris, CEO of the Holocaust Centre, enjoyed reprising his former role as peer guide trainer for Anne Frank NZ when he joined Education Manager Lizzy Eaves at Waikato Museum on June 17th.  This dynamic duo had a busy time in Hamilton, conducting peer guide training at the start of the week and ending the week with the exhibition set up alongside venue staff.

Nearly sixty students from five local schools attended peer guide training and impressed Harris and Eaves with their enthusiasm as well as their knowledge about Anne Frank and the Holocaust.  Large numbers of Year 7 and 8 students attended from Marian Catholic School, many of whom brought their copies of Anne Frank's diary to the training day.  Rototuna Junior High School was also well represented, with students ranging from Year 7 through to Year 10 actively engaged in all aspects of the day's activities.  Senior students from Fraser High, Hillcrest High and Nga Taiatea Wharekura responded well during discussions and were particularly aware of the need to guide younger students from their schools effectively around the exhibition.

The team at Anne Frank NZ are excited that Let Me Be Myself is now located in the heart of the Waikato.  We're keen to know how the wonderful students who attended peer guide training feel about taking their classmates through the exhibition once they book visits in Term Three.  We hope that members of the general public will also make the most of the opportunity to visit the while it's in Hamilton.

Peer guide training at Waikato Museum popular with Hamilton schools
+ Text Size -
Do NOT follow this link or you will be banned from the site! Original generation time 2.1512 seconds. Cache Loaded in: 0.0628 seconds.