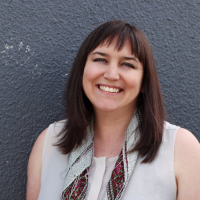 Q: You were Project Coordinator for Anne Frank NZ for 16 months.  How did you get involved in the project?

A: My first job after completing an MA in European History at a British university was as project coordinator for the Anne Frank Trust UK. This job focused on project coordination and marketing for their exhibition, Anne Frank: A History for Today which toured schools, colleges and universities. I was also on the launch team for the Anne Frank Awards for Moral Courage and worked on the project management and educational material for their prisons programme, which is still going strong today. I spent a lot of time travelling to Amsterdam where I met various members of the team at Anne Frank House. In 2013, after I relocated to NZ with my family, I was contacted by Anne Frank Trust UK to see if I could help coordinate a new exhibition coming to New Zealand from Anne Frank House.  The team in Amsterdam connected me with NZ chairman, Boyd Klap, who had organised a previous Anne Frank exhibition and he put me in touch with the Holocaust Centre of New Zealand. It took some time to get everything in place but by early 2017 we were ready to start working on Anne Frank NZ: Let Me Be Myself.

Q: What are some of the highlights from your time as Project Coordinator?

A: The major highlight was seeing the project come together. From the germ of an idea in 2013, to a meeting with Levien from the Dutch team and Boyd in 2015, to the national opening in 2018, it has been an absolute joy to watch so many people pull together to make this happen. By the time I was formally involved in the NZ exhibition, I had worked in the media for several years mostly as a journalist. It was great to use those skills to promote the exhibition.  Seeing Boyd interviewed on Seven Sharp and the opening aired on TVNZ gave me a real sense of achievement. Although I enjoyed developing the additional NZ exhibition panels, my absolute favourite aspect was talking to students who experienced the exhibition through the peer guide education programme developed by Chris Harris. As a teenage history student, I was lucky enough to meet several WWII survivors as part of a programme organised by a teacher at my school. This was a very powerful experience and one that guided me not only toward two degrees in History but to a career centred around social justice.

Q: Why do you think people in New Zealand should visit the exhibition?

A: Until recently, I think New Zealand counted itself lucky to be insulated from many of the horrors we’ve witnessed overseas, particularly in Europe. However, even before the events of March this year, any minority in Aotearoa would have told you this perspective was at best naive. Racism, and the fear that drives it, is present in the everyday lives of a large number of Kiwis - be they tangata whenua, refugees escaping war and persecution, or third or fourth generation economic migrants who look different enough to be a target for the ignorant. Most pakeha, like me, won’t consider themselves racist - yet our very existence in the world, our position in New Zealand, has come about as a result of the racist actions of our forebears, and racist policies that still sadly endure today - such as the policy of putting Maori ward establishment to an unrepresentative public vote, when other wards aren't decided this way. Sadly, this allows racial bias to develop in a covert way - and it’s just a short walk from there to racial discrimination. Anne Frank: Let Me Be Myself isn’t just a look back at what happened in history, it’s a way of looking forward, of challenging ourselves, of deciding what sort of Aotearoa we want to see in the future - what type of country do we want our kids to grow up in. Anne’s words, reaching out across 75 years of war, discrimination and hardship, tell a story of bravery, of fairness and, perhaps most importantly, of forgiveness. She is an example of the strength and optimism I think we would all like to see in ourselves, and which is modelled by contemporaries like Prime Minister Ardern after the Christchurch shootings, or Greta Thunberg speaking at the British Parliament recently. If a young girl like Anne could possess these qualities in the darkest of times, then the average Kiwi can certainly express these sentiments in everyday life. Anne just wanted to live, to experience the world through her own eyes, and to find her own version of success. Isn’t that what we all want? The exhibition reminds us that by supporting each other, we can achieve this equity for all.

Q: Have you any final thoughts about Anne Frank and her legacy?

I think Anne Frank reaches out to students in Aotearoa in the same way as NZ’s brave Holocaust survivors and second-generation speakers, perhaps changing the course of their lives.  I hope that Anne Frank: Let Me Be Myself helps young people to embrace its positive message that can help to heal divisions sadly perpetuated in modern society.

Q&A - Meet Jai Breitnauer
+ Text Size -
Do NOT follow this link or you will be banned from the site! Original generation time 2.1849 seconds.