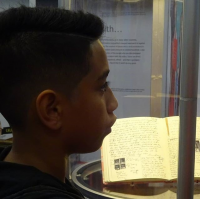 Over the course of four months, from mid-February to mid-June, Anne Frank: Let Me Be Myself was well looked after by the fantastic team at New Zealand's National Army Museum in Waiouru.  During this time,  nearly 15,000 visitors visited Anne Frank, over 1,000 of whom were students from local schools, some booking specifically to see the exhibition from as far afield as Palmerston North.  Despite its remote location, several large groups of students from local schools were trained by museum educators to act as peer guides and this was a very successful venture for all involved.

Nicola Bennett, the museum's Marketing and Visitor Experience Manager, noted that visitors responded very positively to the exhibition and were visibly moved by what they read and saw. The section on contemporary discrimination opened up thought provoking discussions between visiting students but also generated much "quiet reflection".  For Nicola, the exhibition was all the more poignant in the light of the March terror attack in Christchurch.  Both "powerful" and "accessible" for visitors, Nicola and her enthusiastic team at the National Army Museum were "thrilled to host the exhibition" on its journey through New Zealand.

The team at Anne Frank NZ are delighted that Let Me Be Myself  was so well received by visitors travelling to and through Waiouru.  We're grateful to the museum for being such gracious hosts and we, along with Anne, bid a fond farewell to the venue.

Anne Frank bids a fond farewell to NZ's National Army Museum
+ Text Size -
Do NOT follow this link or you will be banned from the server!